Fire extinguishers – how much do you know about them?

Despite the fact that fire extinguishers are very simple devices, surprisingly small number of people actually know how to use them properly. The consequences of this ignorance can be extremely dangerous. We will briefly and as easily as possible present the basic differences between two types of firefighting devices – carbon dioxide (with CO2 marking) and dry powdered (whose designation is S).

CO2 fire extinguisher is filled with carbon dioxide, which activates under pressure and changing from the liquid state (inside the bottle) to gas. The gas temperature at the exit of the devices is a few tens of degrees below the zero, causing all the moisture from the air turn into ice. Because of this so-called “dry ice” these devices have an expanded nozzle.

APPEARANCE: So we’ll recognize these CO2 devices by the expanded nozzle. 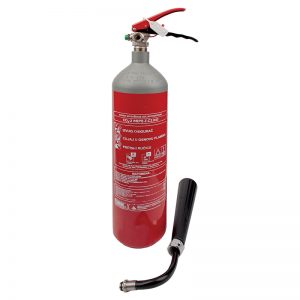 PURPOSE: The best results of the CO2 fire extinguisher is when there is a need to extingush fire on electrical installations and devices. For this reason, these devices are the most often used in telephone exchanges, laboratories, computer centers, and wherever there is a possibility of a fire due to installations failure.It is not recommended to use these devices to extinguish incandescent material, because there is possibility that the gas under pressure causes the mixing of the air and additional fire spreading.

USE: CO2 fire extinguisher have a valve with a wheel. It is necessary to remove the fuse, unscrew the valve wheel to the end and direct the nozzle to the fire. If the valve on the bottle is not open enough, the narrowed opening of the nozzle will simply freeze and stop the gas leak from the bottle.

“S” fire extinguisher is filled with dry powder, and in order to get out of the bottle it must be pressurized with gas, which is located under it in a separate bottle. Often it happens that, due to improper use, all the powder has come out too early because the user didn’t wait for the gas and the powder to mix, so all the gas was released and the powder stayed at the bottom..

APPEARANCE: The basic characteristic of the “S” fire extinguisher is a tubular nozzle. 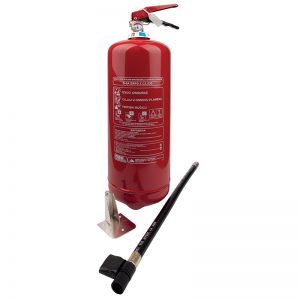 PURPOSE: “S” fire extinguishers are the most efficient in flammable liquids, but they can also be used for extinguishing electrical installations and devices, so they are most often used in industrial plants, warehouses, hotels, garages, residential buildings, buses, trucks, tanks, cars.

We hope that you will not be forced to use these instructions, but it is certainly very important to know the proper use of the firefighting equipment . Make sure you have one of these devices in your home and your car and know how to use it. If you have any questions, leave a comment, and we will be happy to answer you.