Since the ancient times, it was known that certain materials, such as amber, attract light particles from the air after being rubbed. The Greek word for amber is electron, which later became the root for the name for the electricity. The form of electricity, especially important in the field of personal protective equipment, is STATIC ELECTRICITY.

What is static electricity?

Static electricity is static energy of the moving electrons that has not been discharged. When it`s been discharged, the reason is the imbalance of the electrons between the materials that touch. When electrically charged materials are rubbed against each other, the charge is accumulated, leaving one material positively and the other negatively charged. In this process, the electrons of one object are pulled out and moved to the surface of another object. A common example is the charge that is created in our body due to friction between our shoes and carpets. We all used to play with static electricity simply by rubbing a balloon against hair.
This static electric current, however, requires its own path outside the human body. The discharge of a static electricity occurs when a positively or negatively charged object comes into contact with the oppositely charged conducting object. ESD is just an abbreviation for this discharge – Electro Static Discharge. We often feel this phenomenon as a tingling sensation when in contact with other objects or persons.
Almost every object can be a capacitor for a static electricity. The accumulation of static electricity in the human body is much higher in winter, due to the dry air conditions and the wearing of synthetic winter clothes. Wearing clothes made from artificial materials such as polyester, acrylic, nylon, as well as spending full work time near the computer, or some other electronic device, are the most common sources of static electricity.

How are we affected by static electricity?

People used to walk barefoot in the past, there were no synthetic materials, nor exposure to different electric and microwave radiation, hence, static electricity was naturally discharged through ground. Today, our direct skin contact with the ground, the percentage of natural materials in the clothes, everyday objects and furniture is reduced to the minimum. That reduction leads to increased static electricity buildup in our bodies, which can have numerous negative effects on our health. That is very rarely addressed as a health issue or a problem. If this electric charge remains trapped in our bodies, these are some of the consequences: 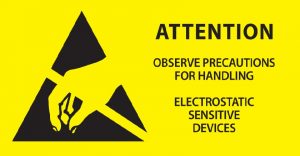 In addition to health problems, static electricity can damage or destroy sensitive electronic components. Elimination or safe discharge of the static electricity is of vital interest in production or handling of volatiles, flammable materials, explosive materials, or such, where one electrical spark can lead to accidents, human and material losses. Also, researchers had shown that inadequate protection from ESD causes more than 70% damage to electronic components.
The need to avoid all of these negative consequences led to mandatory usage of adequate ESD protective equipment – gloves, clothing and footwear when the risk of an accident due to the ESD is present.
It is necessary to emphasize the difference between protective clothes and equipment labeled “A” – which stands for antistatic and “ESD” – which stands for electrostatic discharge. The letter “A” on the label indicates the non-conductivity of the make material, i.e. the clothes or equipment will prevent the accumulation of static electricity in the human body, but it will not prevent its discharge. On the other hand, the “ESD” label means that the protective layer will prevent the discharge of accumulated static electricity in contact with other objects and equipment. It is therefore necessary to use ESD equipment in the electronics industry, operating rooms, laboratories, military industry, production and handling of volatile and flammable substances, etc.

ALBO offers all categories of ESD equipment – gloves, clothing and footwear and protective equipment. What makes this clothes and equipment ESD resistant is a variety of production materials and technologies – carbon fibers, special nitrile rubber sole and absence of metalic parts. For all assistance in selecting protective clothes, equipment and devices for your own needs both with “A” and “ESD” label, the ALBO team is at your disposal.